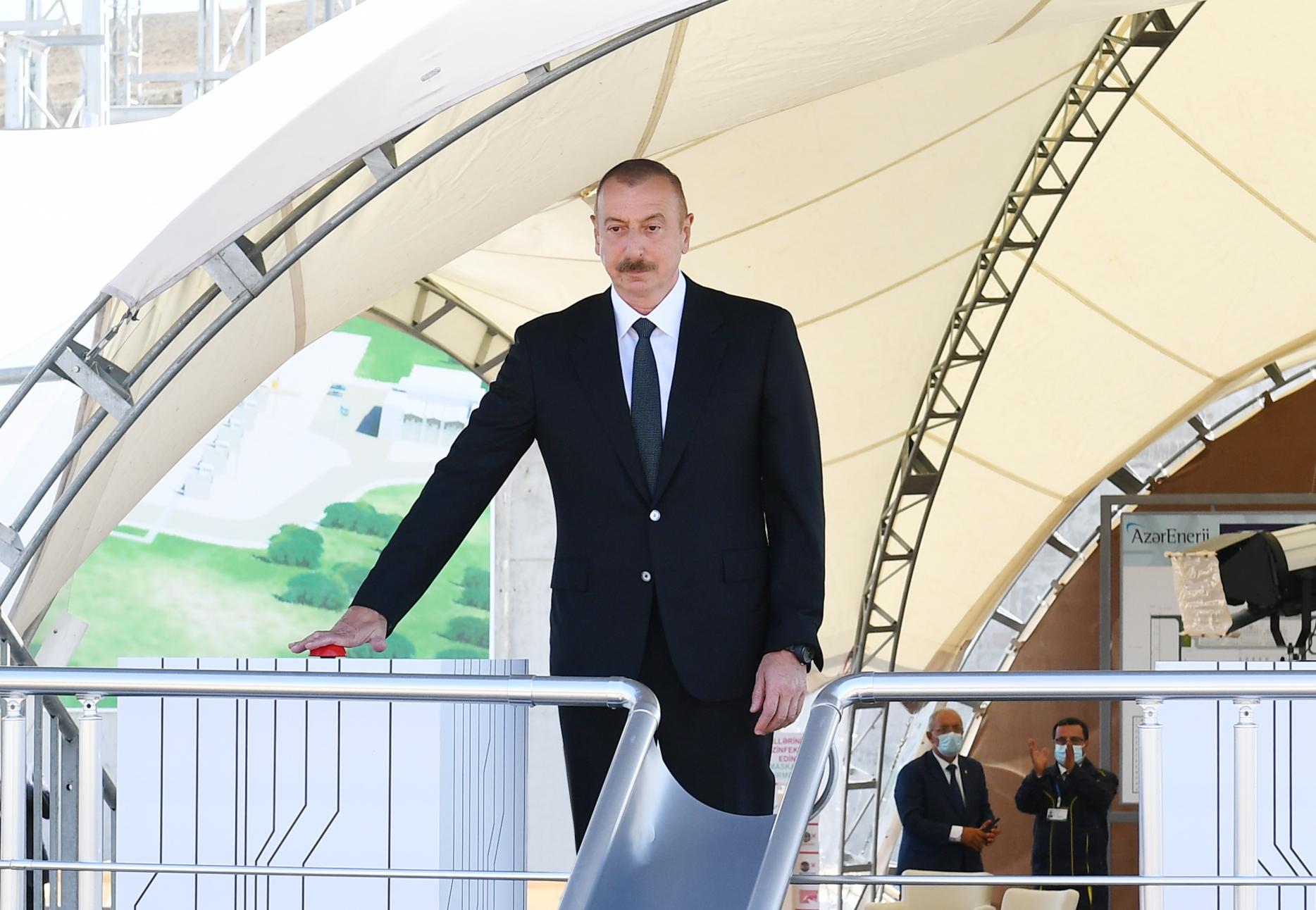 President of the Republic of Azerbaijan Ilham Aliyev has viewed the construction of a 330/220/110 kV Gobu substation with a capacity of 1,000 megawatts.

The head of state also laid a foundation stone for a 385-megawatt Gobu Power Station.

President of AzerEnergy OJSC Baba Rzayev informed the head of state that the construction of a 330/220/110 kV Gobu substation is successfully underway.

The head of state delivered remarks at the meeting.

Remarks by the President of the Republic of Azerbaijan Ilham Aliyev

- Another important step is being taken in the field of power engineering in our country today. We have just laid the foundation stone of the Gobu Power Station. I am confident that the construction of this station will be successful and the station will be fully operational on time – in early 2022. This is a very important step towards strengthening our energy potential. The generation capacity of the station is 385 megawatts. The station will find a worthy place among the large power stations built in our country.

In general, this station is of great importance because it demonstrates the overall development of modern Azerbaijan. The most advanced technologies will be applied here. The world's leading companies will take part in the construction of the station jointly with us. In the meantime, robust international oversight will be exercised.

The station fully meets all international environmental standards. Therefore, we should specifically note its importance from an environmental point of view. Equivalent fuel consumption is low here – 260 grams. Power engineers would know that this is a very low level.

In general, thanks to the work done in recent years, conventional fuel consumption in the energy system has been on the decline. Meanwhile, the losses are diminishing as well. As for the reduction of losses, the significance of this station is that it will lessen the dependence of Baku and the Absheron Peninsula on the Mingachevir Thermal Power Plant. The Mingachevir Thermal Power Plant is located 250 kilometers from Baku and, of course, the transmission of energy inevitably leads to losses.

At the same time, this station is important due to the fact that it will help to scale down the consequences of possible accidents. We all remember too well that as a result of a failure at the Mingachevir Thermal Power Plant two years ago, Baku, the Absheron Peninsula and most of our country were left without electricity. Therefore, the construction of this station on the Absheron Peninsula will safeguard us against emergencies.

As you know, the construction of power plants has a special place among infrastructure projects. I can say that we have addressed this issue as a first priority. It is no coincidence that the construction of power plants was among the top items in the first State Program on the socio-economic development of the regions adopted in 2004. Since then, more than 30 power plants have been built in our country. Of course, I would like to highlight the large stations among them. If these stations had not been built, we would not be able to reach our energy potential today. I remember that following the adoption of the first regional development program, the 525-megawatt Sumgayit Power Plant was built. This was followed by other stations – the Janub station with a capacity of nearly 800 megawatts, the Shimal-2 station with a capacity of about 400 megawatts, and the Sangachal Power Plant with a generation capacity of 300 megawatts. Five modular stations have been built in different parts of the country, each with a generation capacity of about 90 megawatts.

Just imagine that if these stations had not been built, we would still be as dependent on imports as in the past and unable to ensure our own energy security. It is the attention paid to the power engineering sector and the allocated public investment that has enabled us to fully meet our needs. At the same time, we have strong export potential. Despite the growing domestic demand, our export potential is growing year on year. Since 2004, our economy, including our industrial potential, has more than tripled. Thanks to the application of modern technologies, both new generating capacities are emerging in Azerbaijan and, at the same time, losses are decreasing. Despite all these positive results, I should also note that regrettably, during the operation of the stations built in previous years, including the largest station in our country and in the South Caucasus, the Mingachevir Thermal Power Plant, gross mistakes were made. Maintenance was not carried out in a timely manner. No action was taken to upgrade the stations. The stations built during the Soviet era fell into disrepair. Furthermore, generating capacity at stations built from 2004 to the present was largely lost. It was due to negligence, irresponsibility and gross errors that an accident occurred at a substation of the Mingachevir Thermal Power Plant two years ago, leading to major implications. Prompt measures were immediately taken in its aftermath. The management of AzerEnergy was replaced and I ordered an inspection of our entire energy system. This inspection has brought about an extremely unpleasant picture. As I have already noted, the lack of responsibility and indifference inflicted enormous damage to our energy system. But thanks to the prompt measures, the work done and the allocated funds, we managed to make serious progress in this area in just two years and restore the lost generating capacities.

I can say that over the past two years, up to 1,300 megawatts of lost generation capacity has been restored in existing stations. The biggest work was done at the Mingachevir Thermal Power Plant where 600 megawatts of generating capacity have been restored. Today, this plant, operating at full capacity - 2.400 megawatts - is the main source of energy for us. The life of this station has been extended and it will serve us for decades to come.

Therefore, the work done in this area in recent years is commendable. The Gobu Power Station we are laying the foundation stone for today will reinforce our overall energy potential, expand our export prospects and, at the same time, meet domestic demand. Because the demand is growing, and so is the population of Azerbaijan. During the period of independence, the population of Azerbaijan has increased from 8 million to 10 million, and these trends will continue. This reflects the work being done in our country because the standard of living is improving. The stability and peace in our country are among the key contributors to the demographic situation.

The industrial production is increasing as well. Even this year, the non-oil industry has increased. I should note that despite the negative impact of the pandemic on the economy of practically all countries –the economic recession in some developed countries is even at the level of 10-15-20 percent – I believe that the economic situation in Azerbaijan in seven months of this year is satisfactory, the economy has decreased by only 2.8 percent. However, we must also take into account that the oil price has dropped, which has a negative impact on our economic development. At the same time, as a result of the OPEC+ agreement, our output has slightly shrunk as well. However, there is growth in the industry, including the non-oil industry, and this growth stands at 13 percent in the first seven months of this year. These are the realities of today's Azerbaijan. This once again gives us grounds to say that further steps should be taken to build power plants and extend the life of existing ones. We are using our energy potential to the maximum and must continue to do so.

It is gratifying that the world's biggest energy companies are interested in producing renewable energy in Azerbaijan today, and this interest is already being realized. Earlier this year, relevant documents were signed with two large international companies on the construction of solar and wind power plants with a capacity of 440 megawatts.

I do hope that the signing of all documents will be completed by the end of the year and the construction of the stations will commence. The creation of 440 megawatts of renewable energy in Azerbaijan, without the government of Azerbaijan spending a single manat of its own, is a manifestation of confidence in us, a manifestation of confidence in the stable future and development of our country. I should also note that our Ministry of Energy is currently in talks with some of the world's largest energy companies. We believe that through negotiations on the construction of new solar and wind power plants with these companies, we will achieve our objectives and more foreign investments will flow into this area.

At the same time, I would like to inform local and foreign companies that we are determined to continue our work on the production of conventional energy sources. We are inviting foreign and local investors to build thermal power plants, we want to attract them. We also want to involve them in the construction of hydropower and other renewable energy plants. If there is such an interest, I think that these matters can be handled swiftly because a lot is being done in the field of investment in Azerbaijan and the business environment is improving.

We have made historic achievements within the Doing Business program. Azerbaijan already holds one of the leading positions in this rating by the World Bank. In addition, we have been able to make great progress in terms of sustainable development. We are improving our positions on the UN Sustainable Development Index every year. Therefore, Azerbaijan remains a very attractive country for foreign investments and I think that this sphere – the sector of power engineering – is of great interest, and life has already demonstrated this.

To summarize, I can say with full confidence today that power engineering in our country is going through a period of rapid development, and this is the key condition for our development because power engineering plays a vital role in the economy of any country. No other sector can move forward without the development of this sector. Therefore, the construction of power plants as part of the comprehensive measures, the arrival of foreign investors in Azerbaijan, the repair and restoration works carried out at substations, the construction of new substations, the repair of power lines and the laying of new ones, the construction of high-voltage power lines together with neighboring countries and the creation of grounds for regional cooperation are all very important. We successfully cooperate with Turkey, Georgia, Russia and Iran in this area. We can export our electricity along the already created energy corridors.

Of course, when we recall the picture of the past, we see again what historic work has been achieved in this area. Indeed, we used to be fully dependent on imports. Our only source of generation, the Mingachevir Thermal Power Plant, was in dilapidated condition. Therefore, without the development of this area, growth would be questionable, and we managed to achieve this.

I must also note that international institutions acknowledge the work done in this area. I can cite only one figure: a report of the Davos World Economic Forum ranks Azerbaijan second in the world in terms of access to electricity. This alone is enough to sum up the successes achieved in this area, and this is a truly historic achievement. To be ranked second on a global scale is in itself a great historic achievement, especially in the most important area of infrastructure projects – in the sector of power engineering.

I congratulate Azerbaijani power engineers on all these achievements and wish you continued success. I am confident that the Gobu Power Station will be commissioned on schedule – at the beginning of 2022 and we will celebrate its opening together. Thank you! 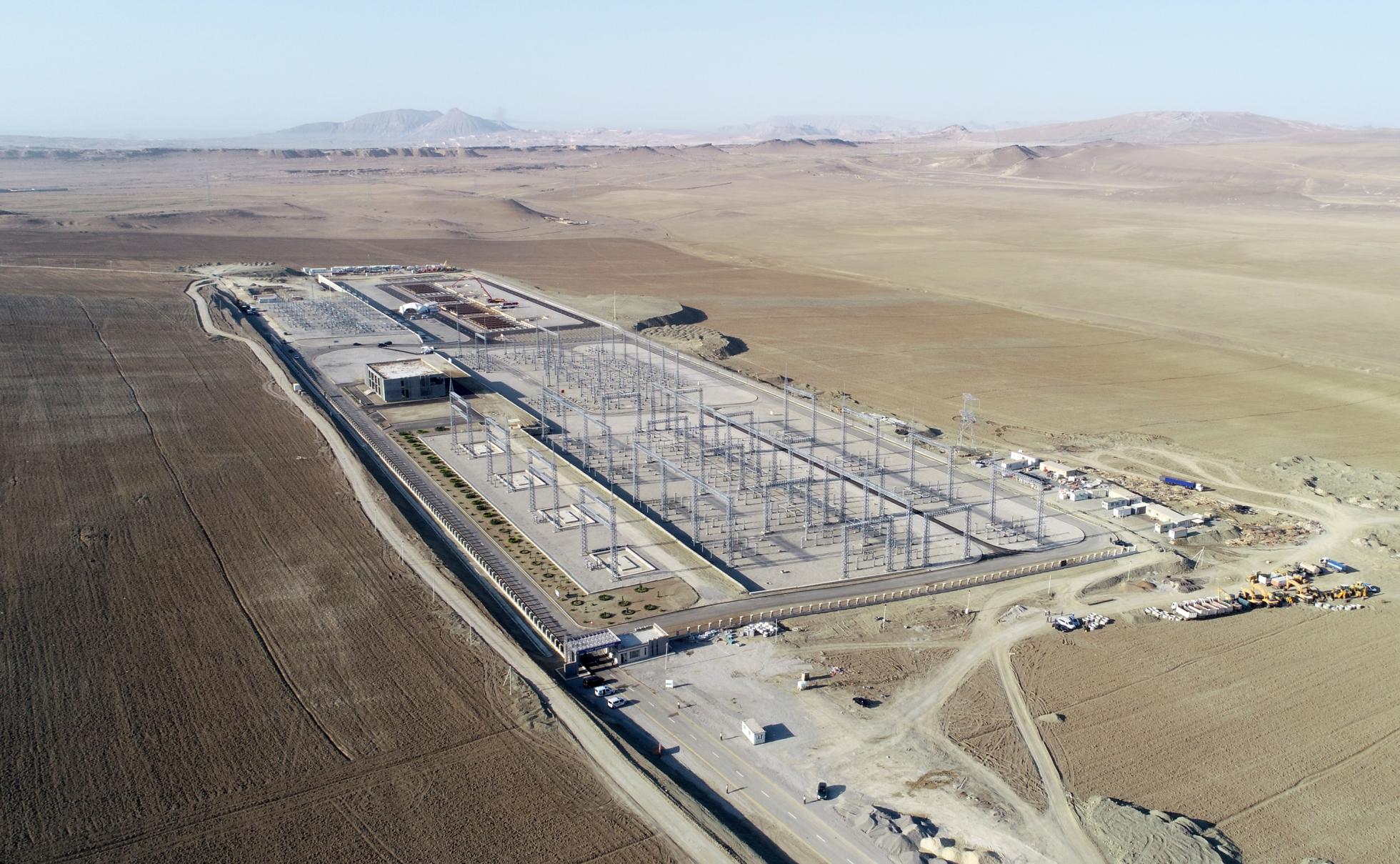 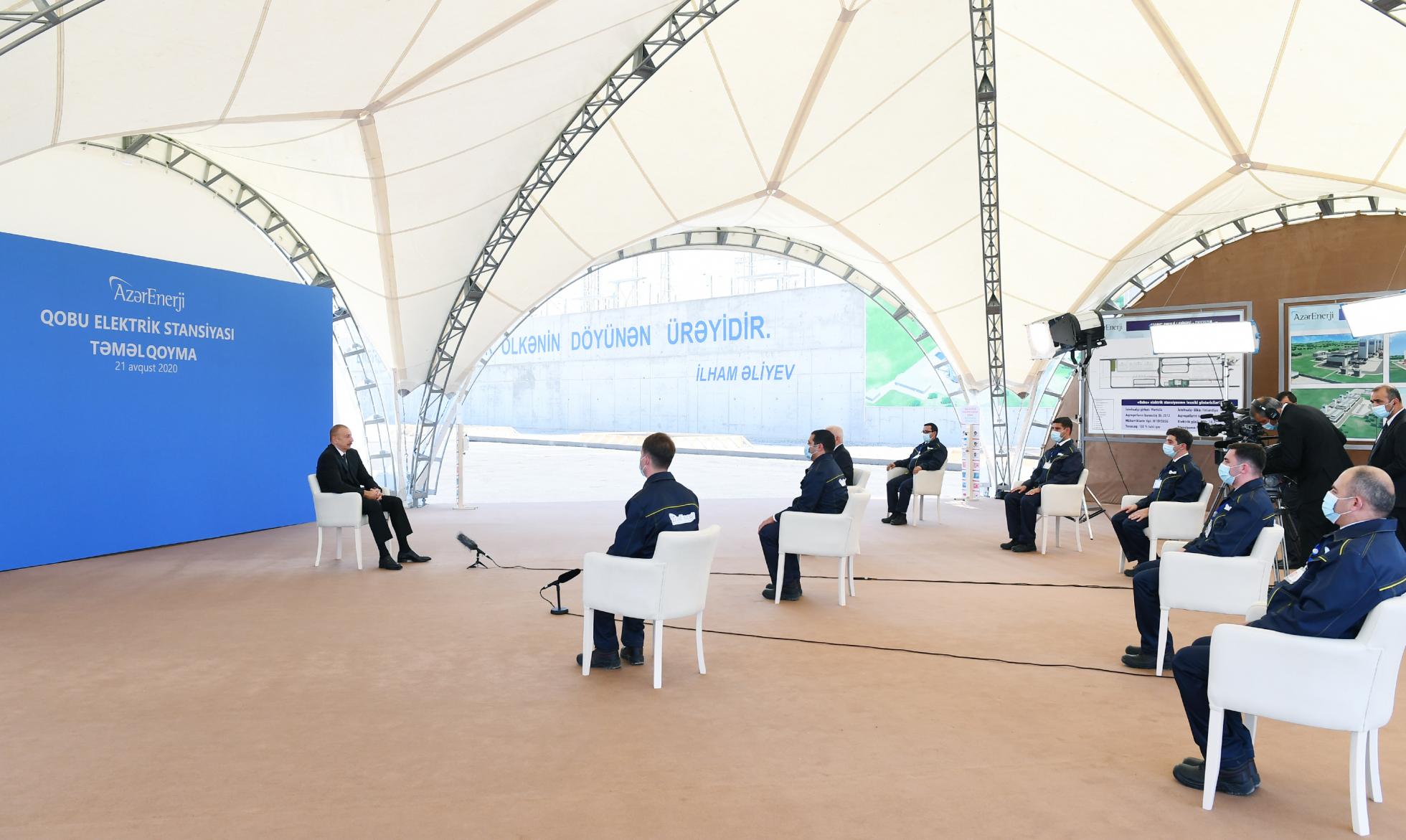 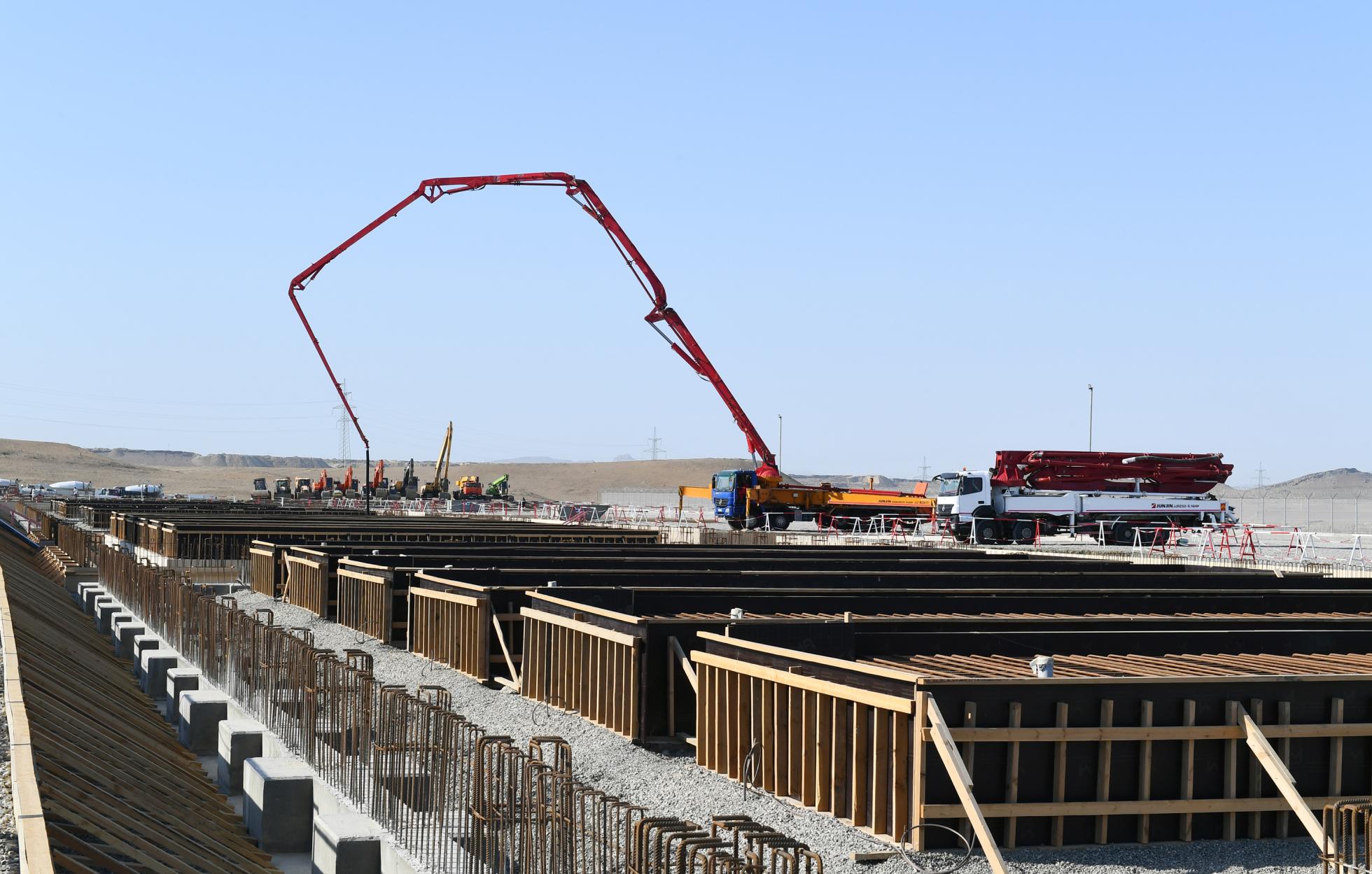 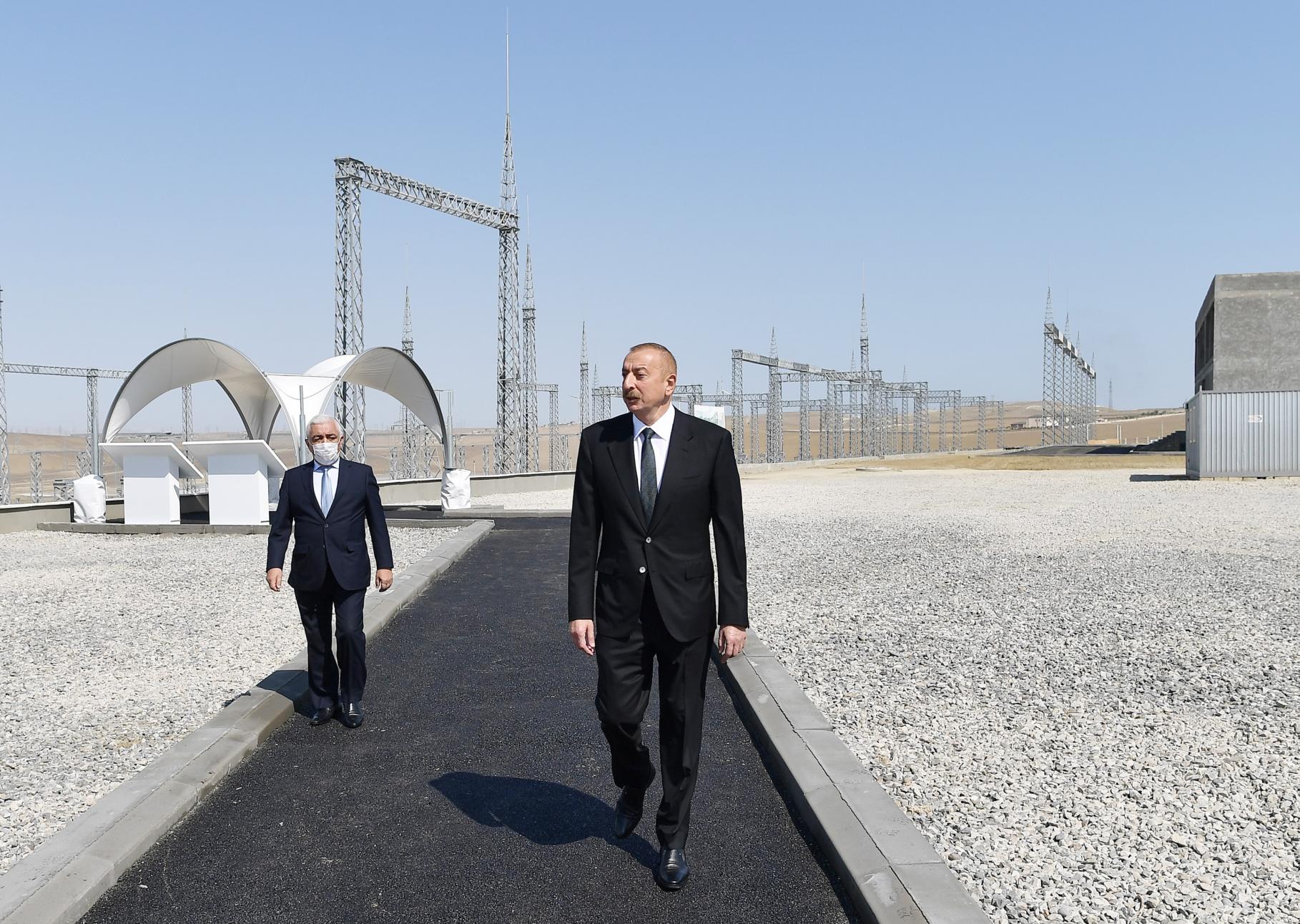 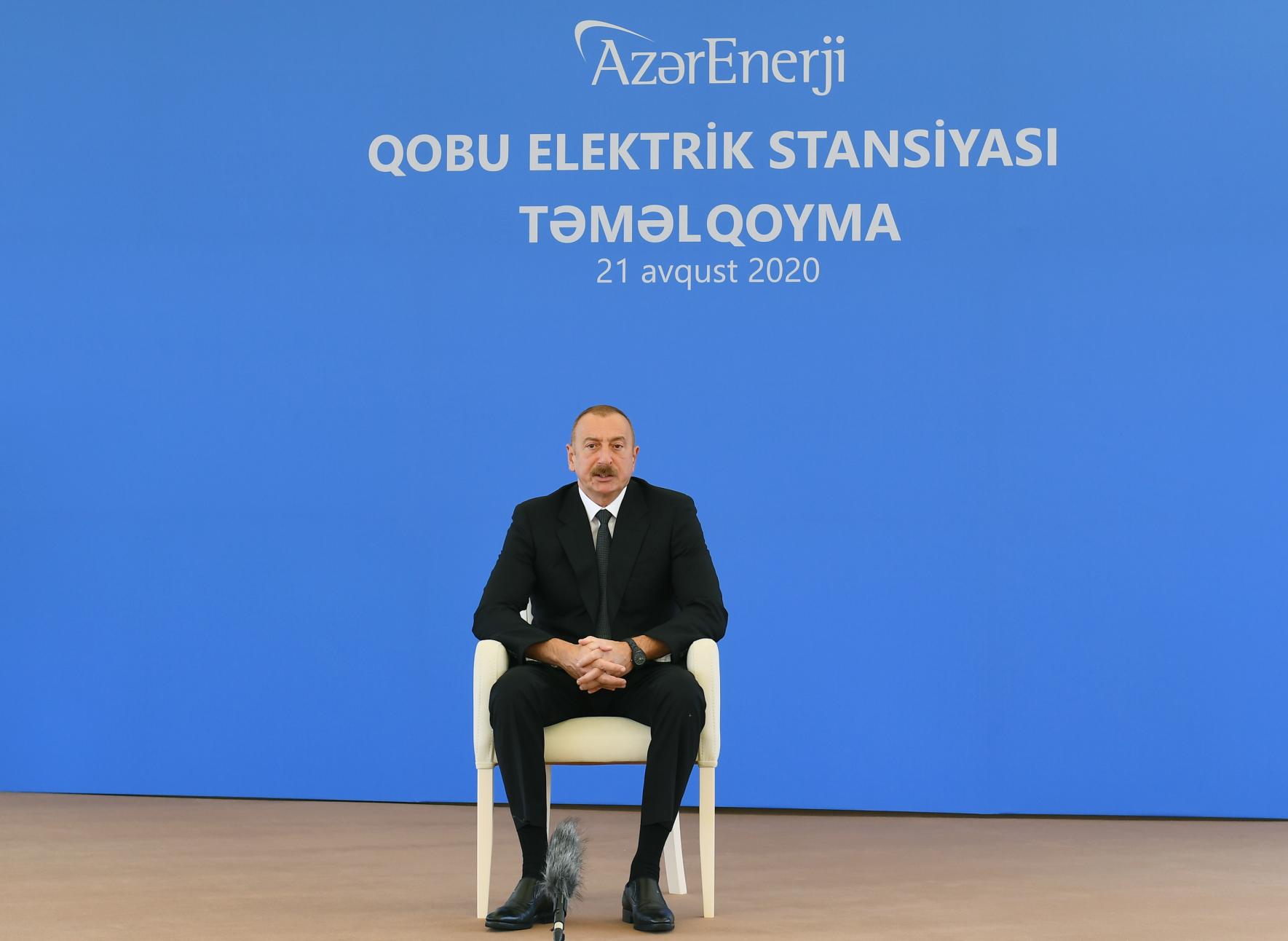 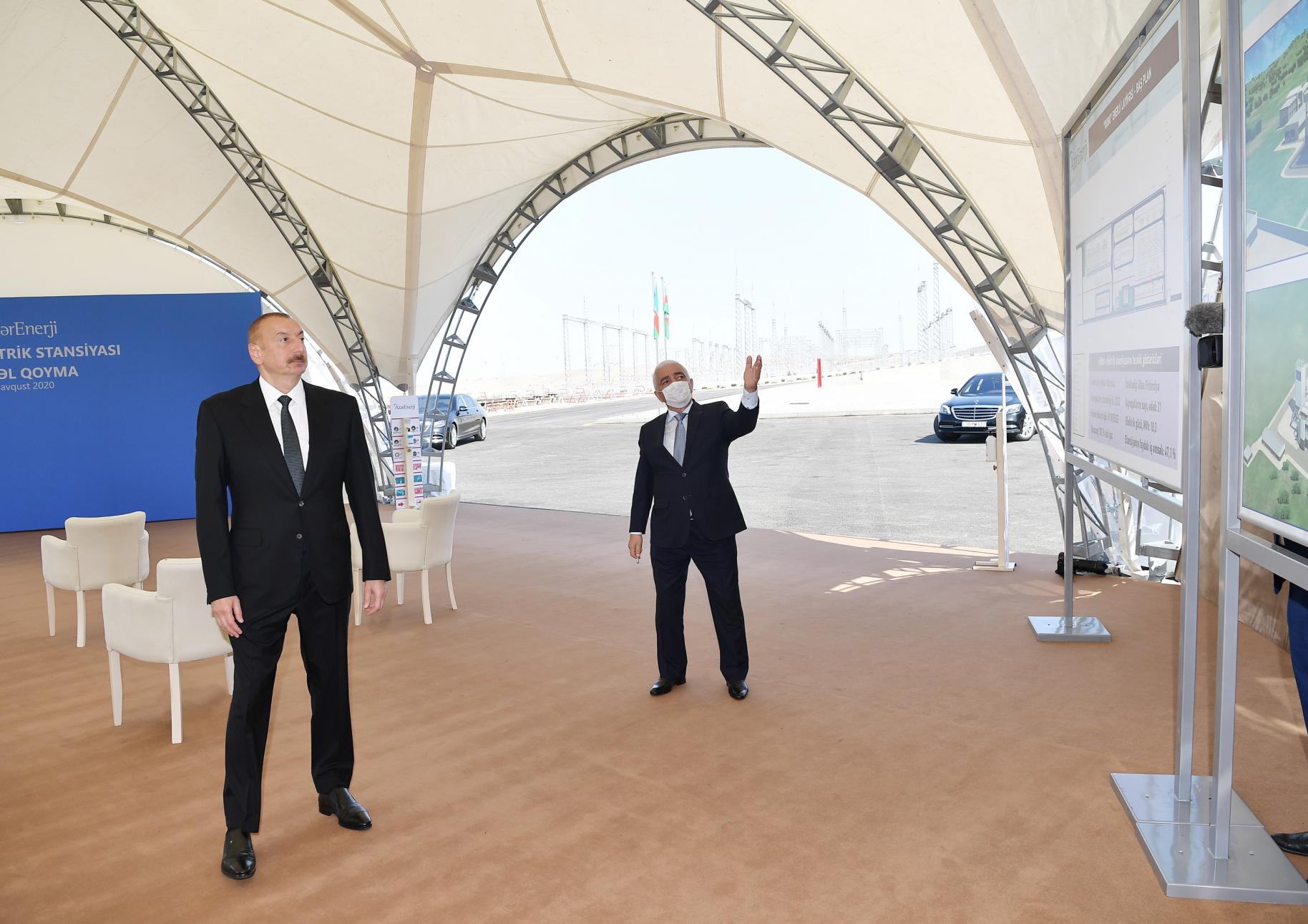 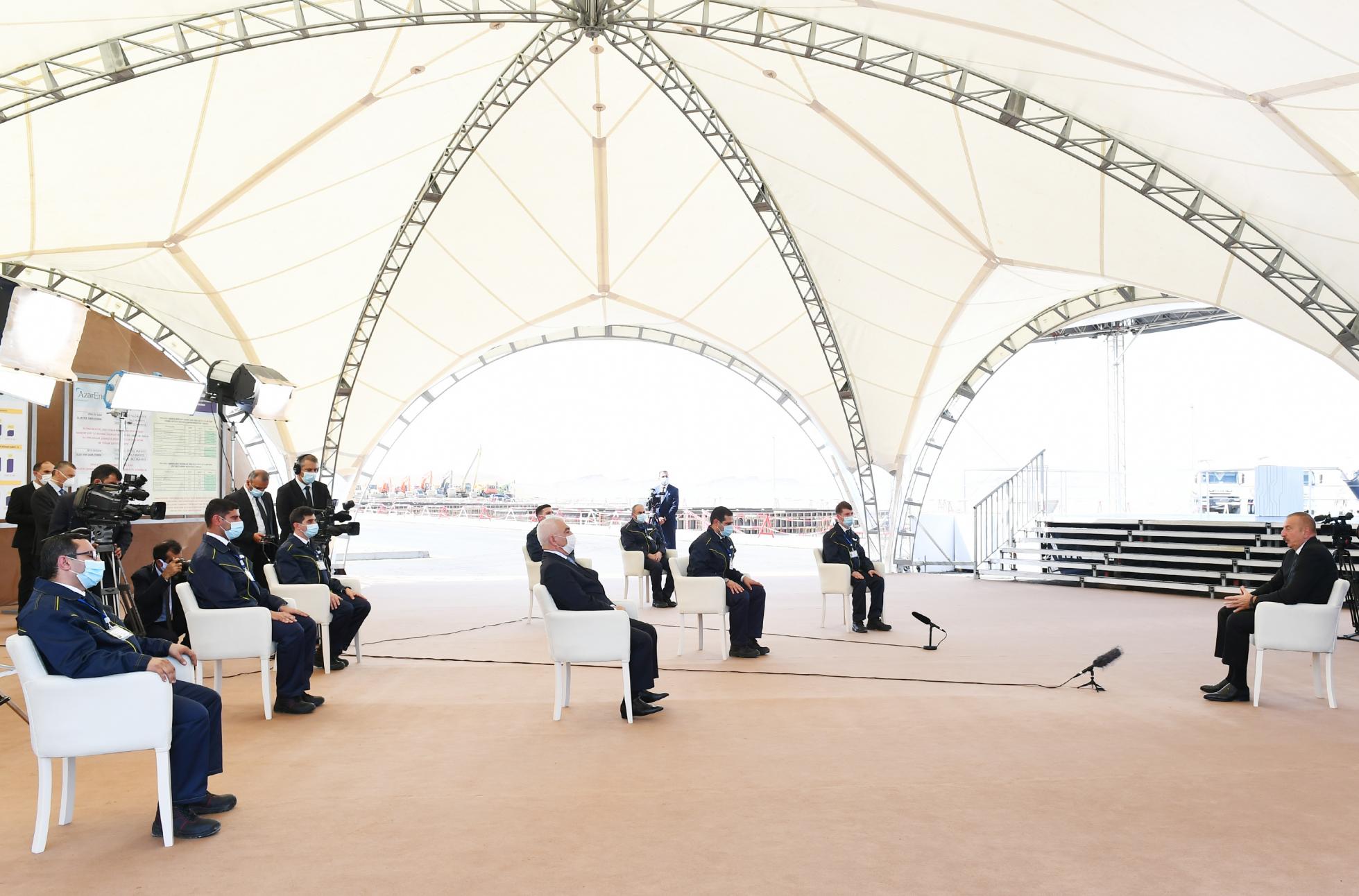 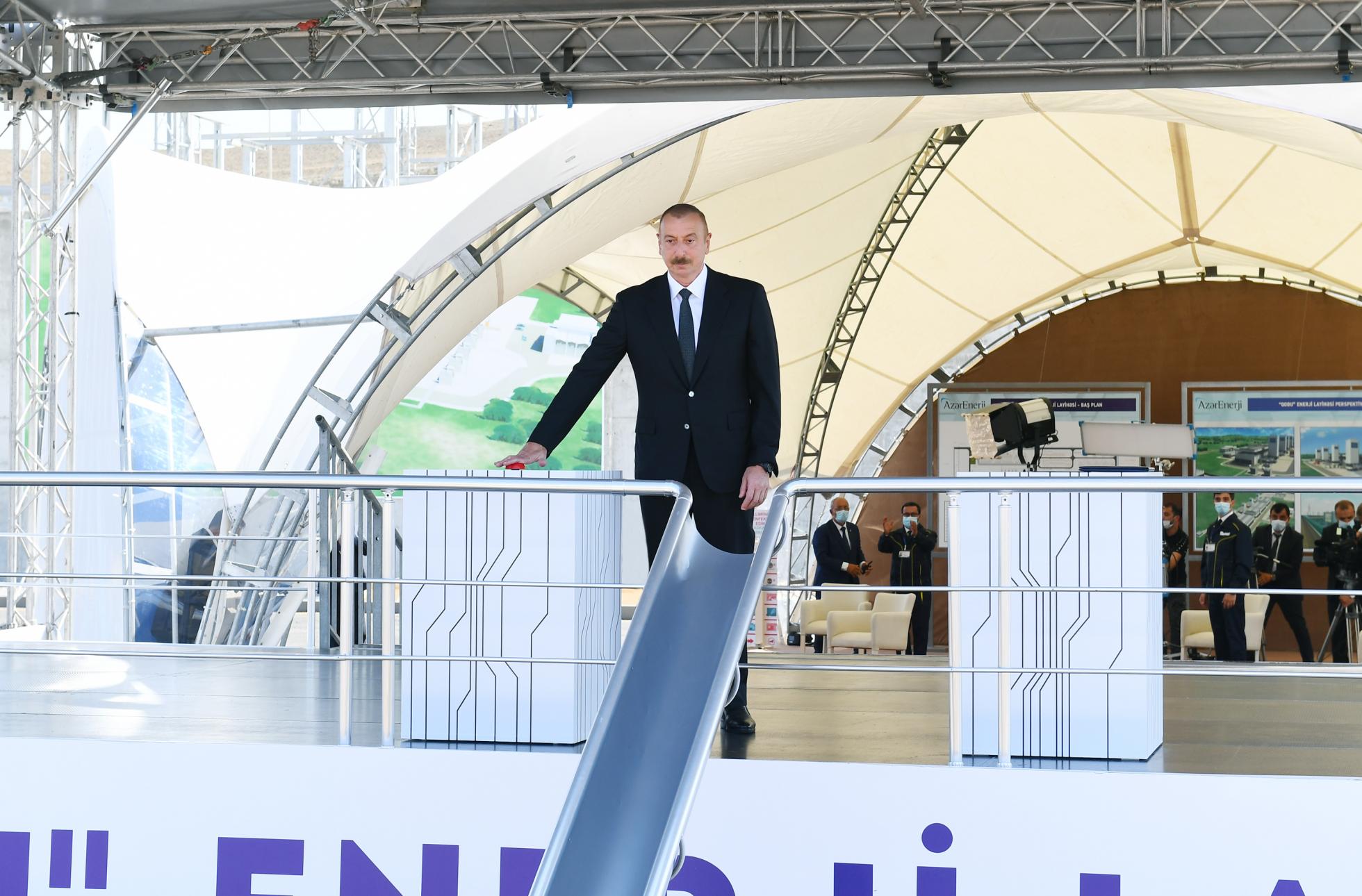 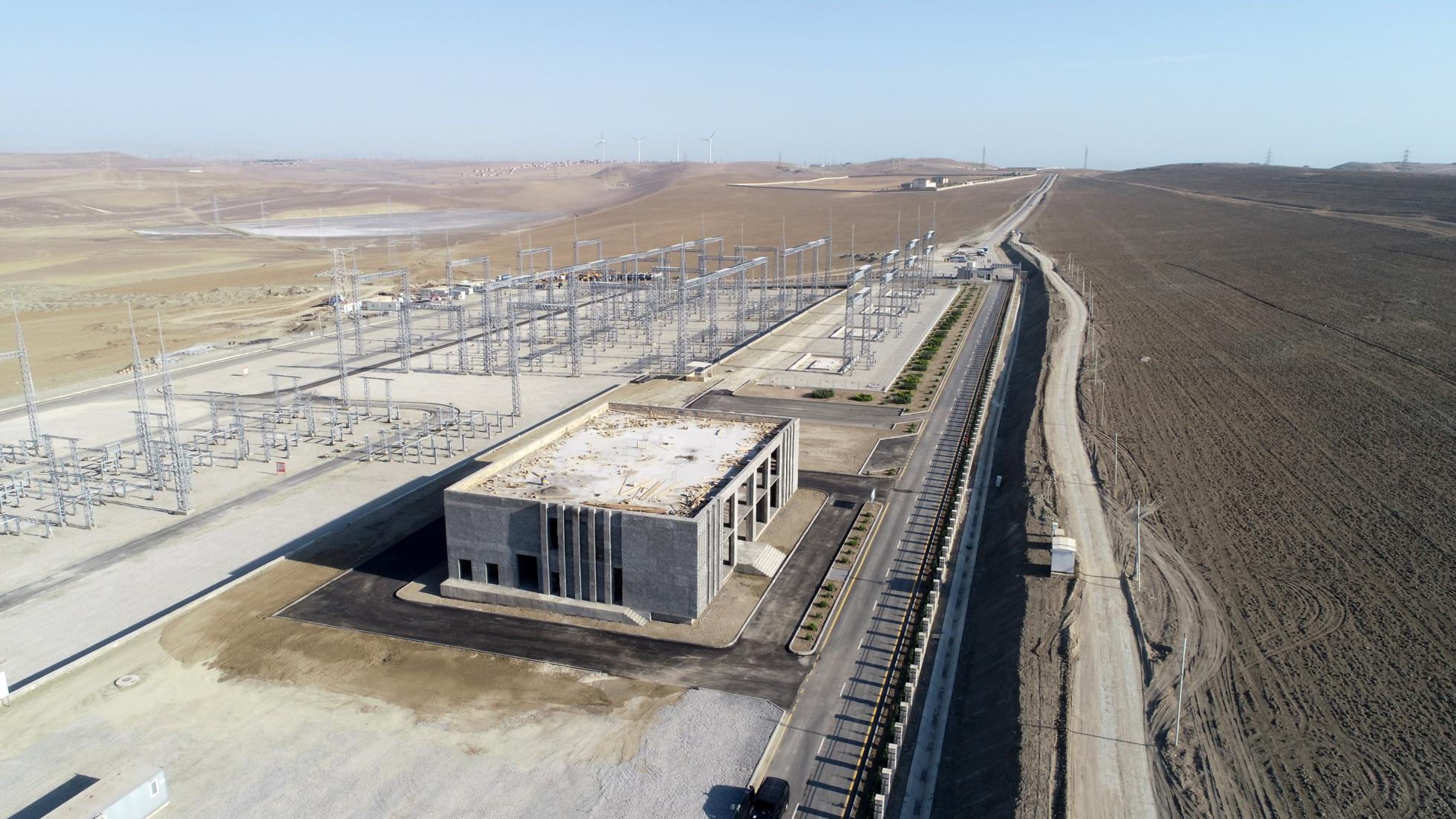 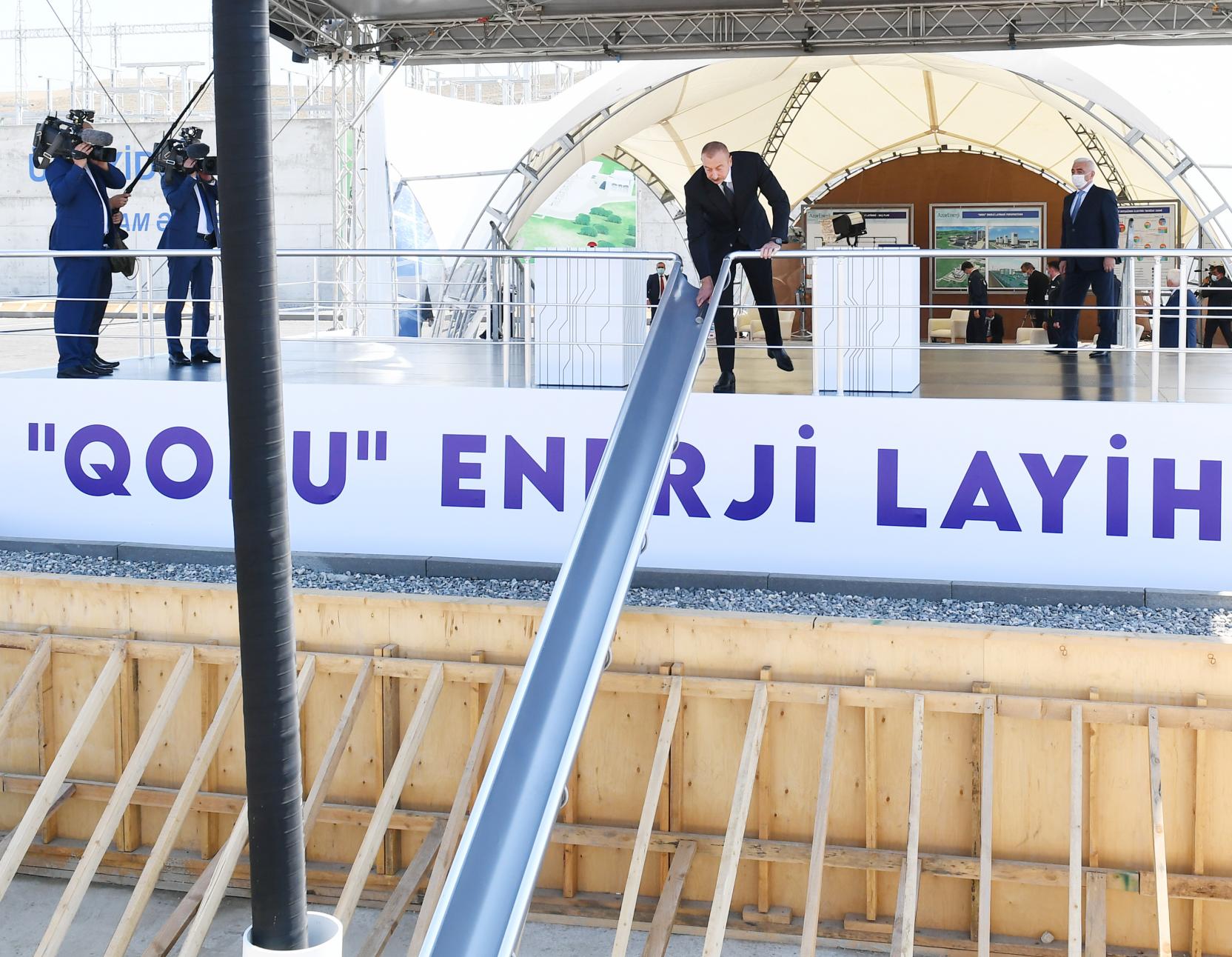 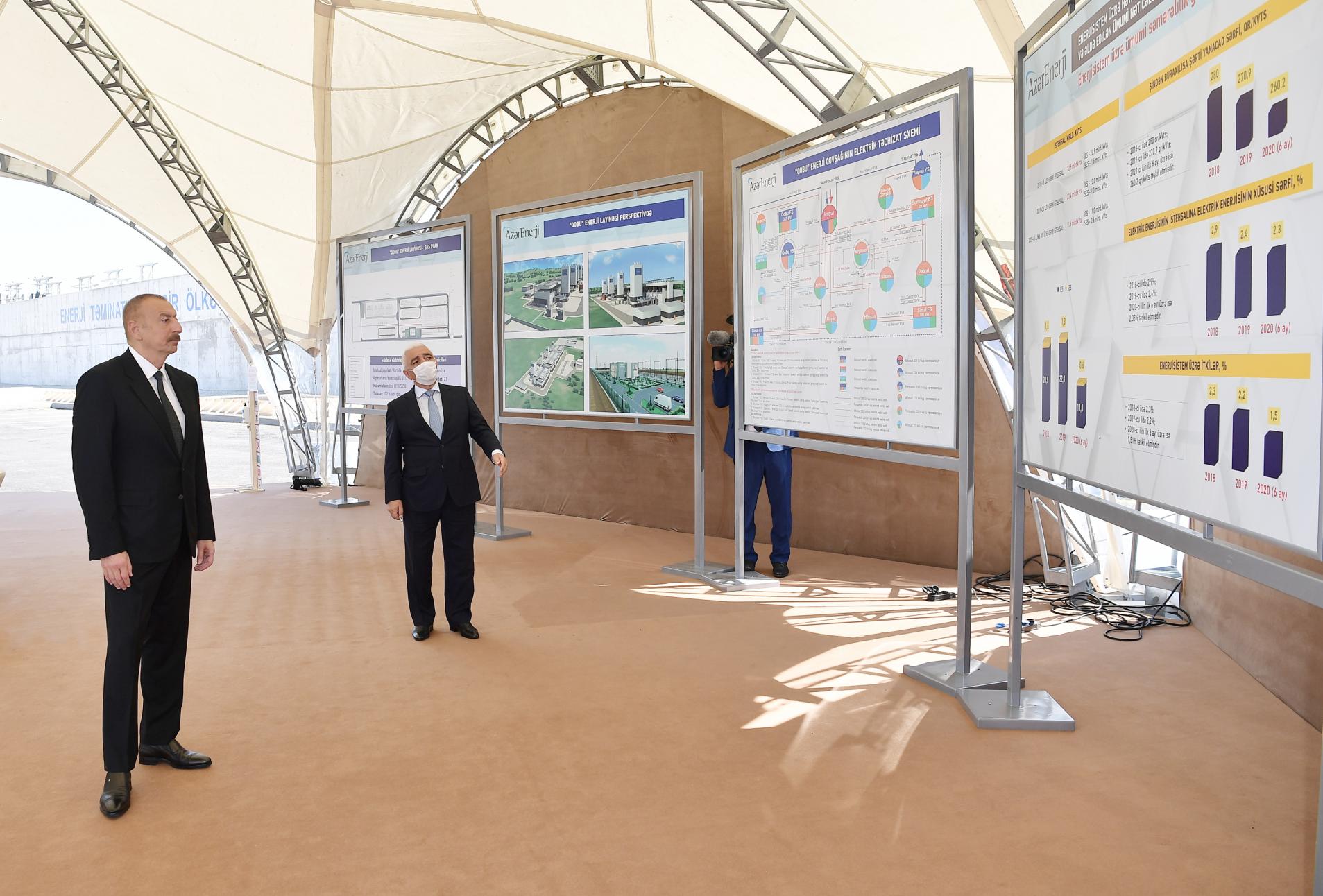 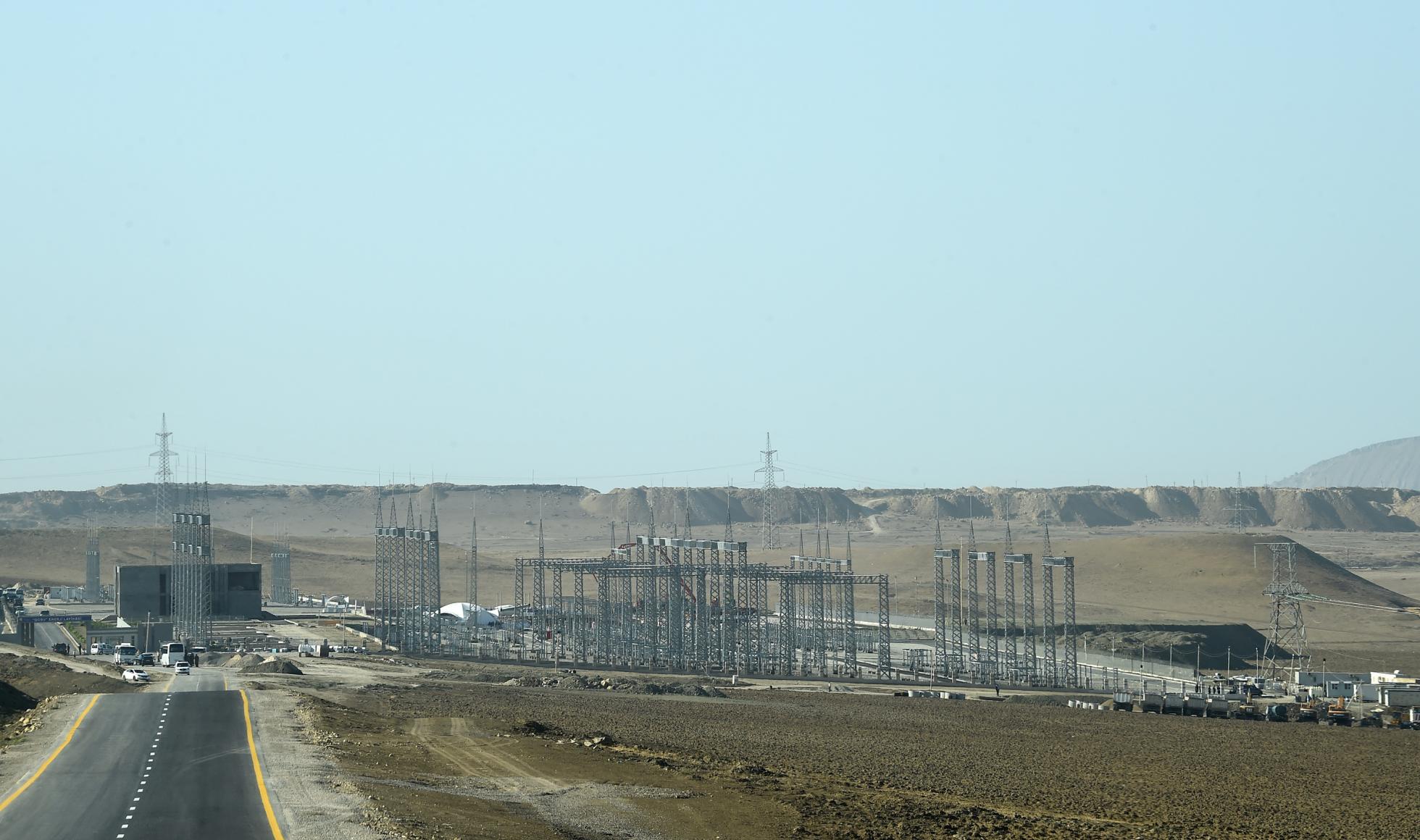 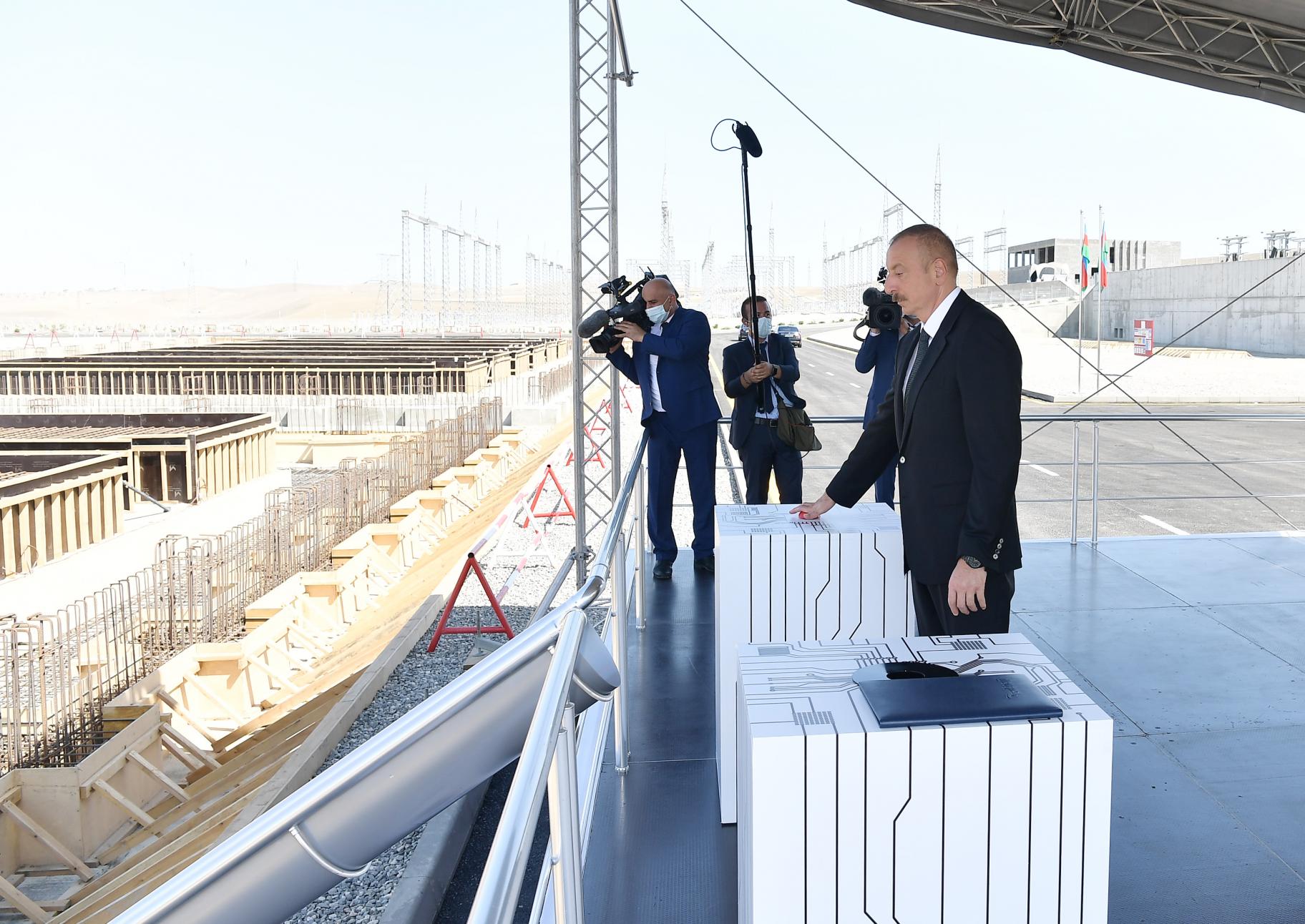 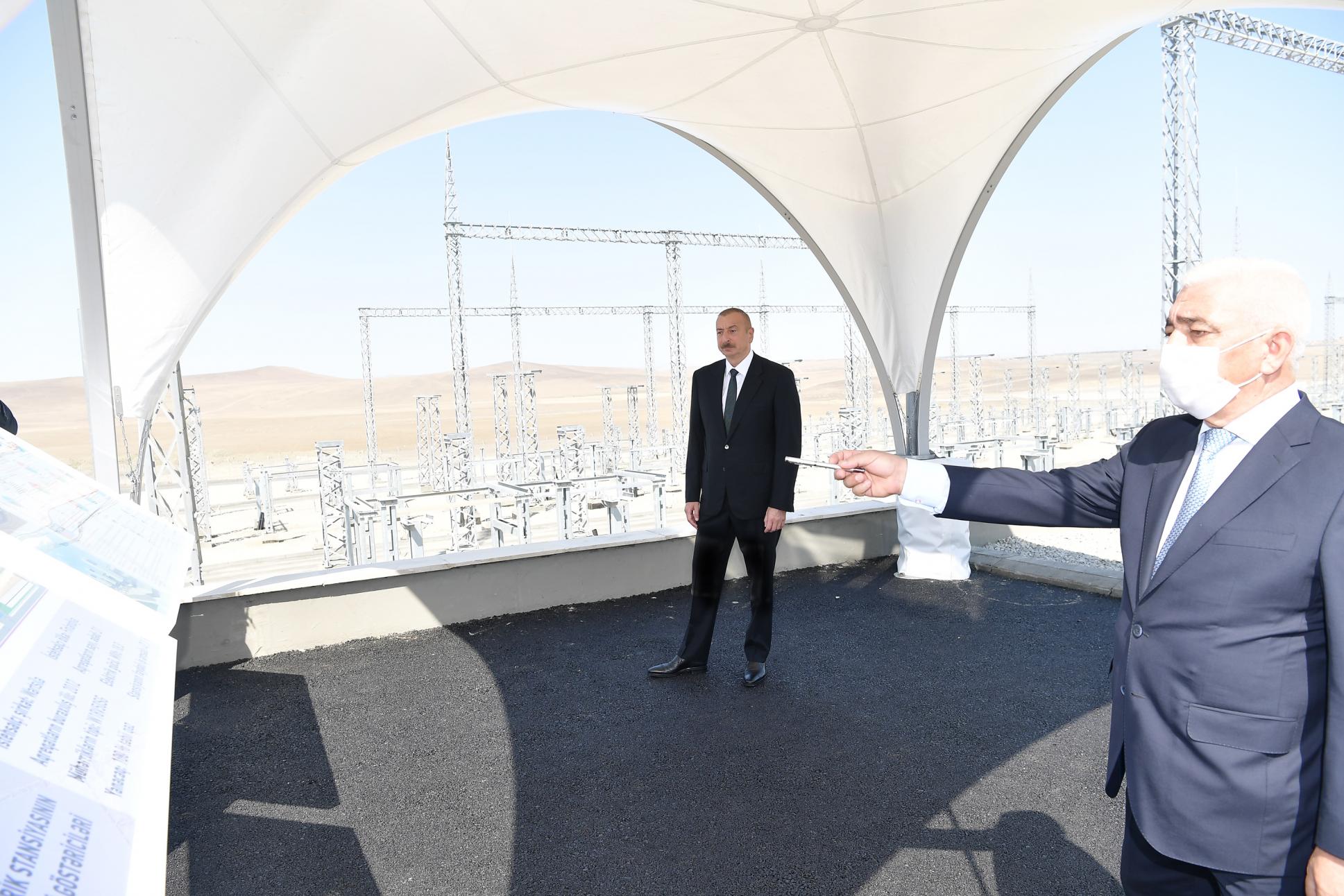